Panel (Page, Actually) of the Week

Dear loving God, I think I may have gone overboard on the books this week. I bought about double my usual pull and mostly because there were issues I figured would be good picks for review on this here blog.You should all feel so special.

And here come the reviews:

Taskmaster is an underated character. He’s really been getting his due in this book and this issue is no different. Initiative shows the POV of the ground level people going into the Siege on Asgard, particularly Taskmaster and Diamondback. We really get to see a clear defintion of why it is Taskmaster does what he does, something that I found refreshing in that it really fleshed his character out further than we’ve seen previously and hopefully it will generate some more interest in the character so that he sticks around after Initiative goes the way of the dodo in April.

BATMAN & ROBIN # 7
Long delayed and anticipated in ways I cannot possibly describe, the seventh issue of Grant Morrison’s flagship title for the Batman reborn storyline picks back up with a bang, not losing any of the kinetic energy that has made the book such a great read from it’s inception. The story begins in London with Batman racing against time through the streets trying to stop a runaway train brimming with explosives. The pacing of Batman’s movements through the city showcase all that artist Cameron Stewart is capable of and at the same time reminds us that Dick Grayson as Batman retains so much of the acrobatic skill that made him so formidible as Nightwing.

The book then escalates, delving into conspiracies regarding an old mine that may or may not have certain regenerative qualities. Sure enough, Batman and Robin show up and find a viable Lazarus Pit. With the themes already touched upon in the last few issues regarding Bruce’s death, one can easily see where this leads; but everything Grant Morrison does is always slightly off kilter, and I would wager that the final page of this issue is going to lead to something that defies expectation.

It should be noted that the issue has a really big lettering error, one which is devestatingly confusing. I know at least one person who assumed this was some sort of weird Morrisonian style choice, but it’s nothing so sinister. Just swap the speech bubbles and it makes perfect sense, and all will be well.E

Following J.H. Williams on the art duty for Detective is pretty much like expecting a garage band to play the encore for Led Zeppelin. Artist JOCK does a great job on the title, bringing his signature look to the book an creating his own template for the action. Rucka does well balancing the dual stories, showcasing Batman and Batwoman’s investigation of the same case.

While I certainly miss the unparalleled art by Williams, this arc looks to be Rucka at the top of his game, and if that’s the case, it really doesn’t matter who is pulling the art chores.

A book where the Red Hulk and Abomination team up to learn how M.O.D.O.K. repeatedly clones himself and harvests his own organs for future use. I’m a sucker for anything remotely involving M.O.D.O.K., so the fact that this book technically doesn’t need to exist in any way shape or form can be overlooked.

I haven’t been reading Robinson’s JLA. I read the first issue of Cry for Justice and decided that no good could come from reading anything Justice League related from that particular author. Picking up this issue, I can honestly say that I was probably right. The narrative seems jumbled and the characterization stilted. I know from his run on STARMAN that Robinson can handle a diverse cast. The only explaination I can think of for his inability to craft a coherant JLA is that in STARMAN, he built his world from the ground up. Robinson seems to have issues playing in other people’s sandbox with JLA and it is visible on every page.

Which is disappointing because Mark Bagley is turning out some really nice work here, drawing a wide spectrum of characters with all his usual skill. The fact that one of the most competent artists on the DC roster is stuck drawing such a lackluster book is perhaps the biggest shame of all.

I’m not sure where this fits into the movie continuity. It seems like it either takes place before the third film or ignores it entirely. I don’t so much care about the continuity, that stuff doesn’t really matter with a book like this. What bothers me most about this book is just how damned sloppy it is. It reads like tiresome fan-fiction, which is forgiveable considering that that essentially what it needs to be. What really drags the book down is the ham-fisted way they try to shoehorn blatant social commentary about our current financial dilemma into the narrative. And while the original film did a good job mixing action and subtext, this book doesn’t seem to know how to do it without coming off as forced and trite.

I have no f**king idea what happened in this issue. Ben Grimm hit on the Invisible Woman and then started shedding like a mangy dog, a building exploded with a purple blob thing, and Nick Fury has lunch. I’m pretty much willing to accept a lot but paying $3.99 for this makes me slightly angry.

Gail Simone knows how to write Wonder Woman. This issue features creepy Childen of the Corn kids spreading hate-speech, racism, and fear and eventually Power Girl shows up. I love Power Girl, so this book is immediately awesome, but the character moments in the book are so strong that it didn’t even need her to win me over. Gail has organically been building this series in such a manner that in a few years it will likely be held up alongside Perez as the pinnacle in what can be achieved with the character.

And that’s it for this week. You’ll notice I actually reviewed more than one DC book this week. Aren’t I a generous soul?

THE LOSERS get a trailer…

Here’s the first look at the film adaptation of Vertigo’s THE LOSERS, which looks so damned good that I’m almost afraid that this is some sort of hallucination brought on by a whiskey overdose…
CLICK TO VIEW

So, I Got Mentioned In Wizard…

Okay, so that may not mean a whole lot in the grand scheme of things, and it in no way will get hits for this site, (grumble, mutter) but it’s still kind of cool. I mean, I give Wizard a lot of grief for esentially degenerating over the years into a personal ball-tickler for Marvel Comics and a second rate magazine that offers no viable editorials considering its breaking news usually hits stands two months after the details have already hit the web; that much I admit. However, it is sort of a long-standing institution in the comic business, and the fact that when they removed the price guide section everybody raised hell to get it back, knowing that having monthly updates helps both collectors and retailers in more ways than we’d like to admit, shows that it still retains some relevance.

Basically, I’m going to use this as a cheap excuse to claim that my opinion on comic books is somehow valid because it has seen a few lines of print in publication that I didn’t pay for.

And Now, The Many Emotions of Victor Von Doom. 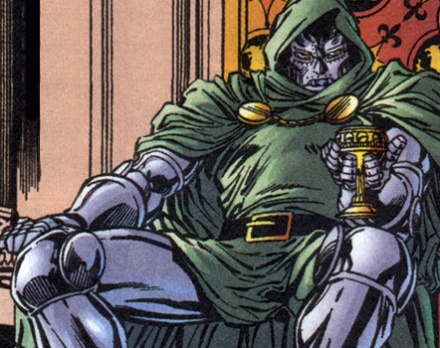 And Now, Another Context-Free Moment Of Comic Book Innuendo…

And Now, Another Stupid Moment in Comics… 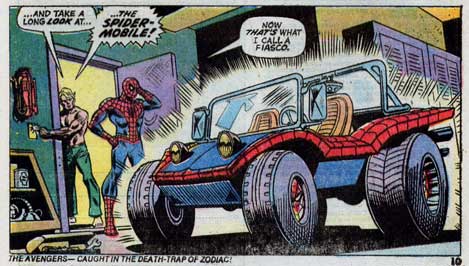