It’s that time again! Time for me to tell you what sucked and what did not. I should caution you that most of what I review will be positive, as I don’t often buy books that I feel I won’t enjoy. However, I am making a point to pick up new books simply to give insight that otherwise wouldn’t be offered on this blog.

I think that Marvel is doing an excellent job of capturing the feel of classic Spider-Man nowadays. The voice the writers are projecting onto Peter Parker here is highly reminiscent of the best Spidey stories of yesteryear. From the quips to the inner monologue, to the actions of his supporting cast, it’s all very much in tune to the earlier Spidey stories than anything we saw during the JMS years. And while I dug JMS’ run, and think it will be remembered fondly by those who were first introduced to Spider-Man during his tenure, I cannot help but have my cockles warmed by what we have on display here.

The story looks like it will finally tie up some loose ends with Mr. Negative, and his connection to Aunt May, as well as give us the return of Mysterio, who last had successfully scratched an itch in the back of his head with a shotgun. Is this Mysterio back from the dead or another new name throwing on the suit? Given what we’ve seen in Brand New Day thus far with new iterations of the characters, the latter seems possible but given the classic tone of the arc, I wouldn’t put it past the team to pull a full resurrection.

The book lacks the emotional resonance of last week’s Rhino tale, but is a satisfactory story all the same.

Well, the regular Captain America title returns, and honestly from the pages of this book, aside from a few lines of dialogue referencing it, you never would have known the whole “Reborn” situation ever happened. Bucky is still the central focus of the narrative, and the plot threads from prior to Steve’s return are being followed up on in true Brubaker-ian fashion. The man lives to tell these sorts of stories. They have that Marvel feel, utilizing the eccentricities of the universe with uniformed henchmen and acronymed evil organizations; but every bit of Brubaker’s storytelling prowess in the realm of the hyper-realistic, drawing from his work in the street-level drama that he does so well, is on full display here.

I cannot help but think that we’ve been cheated by having this title sidelined while the “Reborn” miniseries ran it’s course. Brubaker’s Cap book is a serial masterpiece, one that really needs to build on monthly steam. I guess I should just be grateful the train is back on schedule.

Helping me forget my complaints is the excellent Nomad backup story that picks up immediately after the excellent “Girl Without A World” series. I know it’s a secondary feature, and thus it is going to have to be limited in length, but I definately wanted more by the end of the issue. Still, better for Nomad to see publication in the back of a book that will run indefinately, rather than get her own book and get published before a sixth issue like SOME TITLES I COULD MENTION. (***Grumble***)

Brian Michael Benids has had this weird facination with the Sentry that I just did not understand. The Sentry, as a character, is quite bland and really doesn’t work on any other level than the occaisional joke at his expense. So in this issue Bendis finally reveals his master plan for the character and essentially rewrites the whole book on his existence (yes, again).

I won’t spoil the revelations, but I will say that they’re not even shocking at this point. Just confounding given that for the emotional weight behind them to truly work, we as readers would have to give a damn about the character, and I personally do not. I know I am not alone in that regard either. While the changes Bendis makes open up interesting possibilities for the character, I wager that those changes will not resonate either. Given the character’s history of retcon after retcon, how can we expect whatever change that follows this revelation to be any more valid than the last?

If any word describes the developments of this book, it would be “frustrating.” 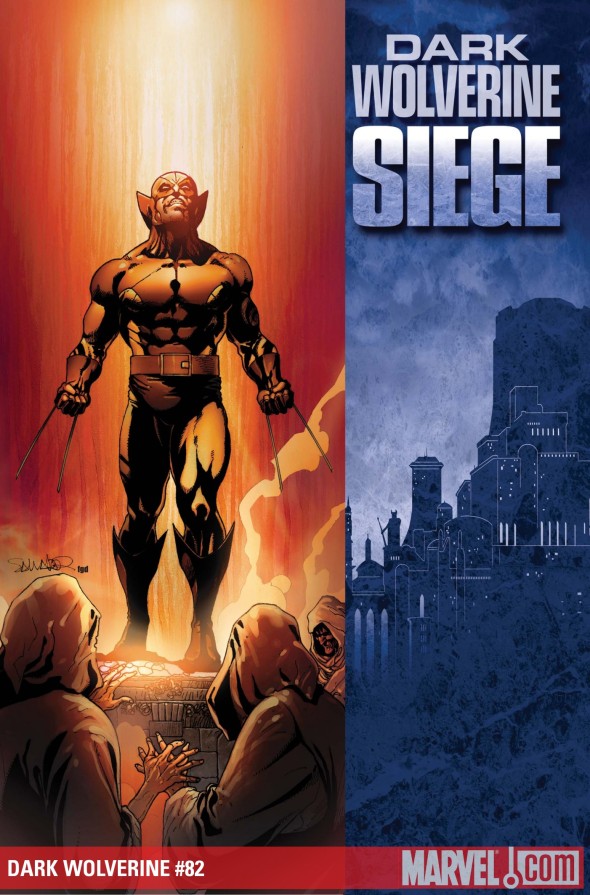 I have largely ignored Dark Wolverine, choosing to focus on “Weapon X” as my go-to Wolvie title. I decided I would give it a go with this issue as part of my imperitive to follow the event through the majority of it’s tie-ins. I was a little surprised by the book, given that the characterization of Daken in his own title as compared to the Avengers appearances I’ve read seems somewhat off kilter. I suppose it could be the characterization in the Avengers titles that is off, but I suppose that’s a matter of perspective.

The book itself is actually quite interesting, and the ending actually shocked me. I know that what we see is some sort of narrative trick, but damned if it didn’t make me want to pick up the next issue.

Deadpool goes dimension hopping, a bunch of artists illustrate the different worlds. Jokes are made, and oddly enough I wasn’t very entertained. The humor on display here wasn’t really up to the general Deadpool snuff. In fact, aside from one panel, I didn’t really so much as chuckle. I find this extremely odd because the previous issues of the book practically had me dying from laughter. I hope the book picks up with the next issue, because Deadpool has three titles, and they had better all be excellent otherwise I might get bitter about Deadpool having multiple titles that aren’t all that good when OTHER AWESOME BOOKS GET THE PLUG PULLED ON THEM UNDESERVINGLY!!!! 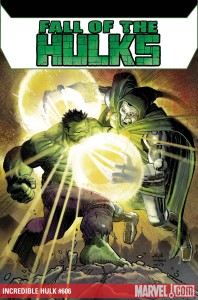 I admit that I have not been following these titles as of late, and so I’m going into this whole Fall of the Hulks thing completely blind. That having been said, I think Incredible Hulk did a great job of bringing me up to speed with the book’s status quo without feeling like a major exposition dump and Hulk # 19 was somewhat jumbled but not nearly the clusterfuck I had been led to believe Jeph Loeb would be making out of the title.

I’m not big on the format of this event. I would prefer that the books led into each other in some way rather than telling independent parts of a larger story, as I cannot seem to place the books along any real timeline, though I think that longtime readers may have a better grasp on the comings and goings than I do.

Another small note, the art in Incredible Hulk is some of the best stuff I’ve seen in a while. Stylistically interesting while still being technically solid. I wish more books could find that balance.

Grant Morrison is an amazing writer. Sean Murphy is an amazing artist. Together what they create should be interesting to say the least. Unfortunately not a whole lot happens in the first issue. The idea is presented but we have no real inkling of the direction it will take. I’m going to pick up the second issue, just to get a grasp on where they’re going with this, but if they really wanted to take advantage of that $1.00 cover price, they probably should have given us a little more content.

In this book, the words “Pregno Ray” are used. Beyond that, you really should not need any more information.

And that’s all I’ve got for this week. Join us next time when I’ll have more than one book from DC on the list (I Hope.)