Fear not, helpless masses! I am returned! After delays and setbacks and general stuff happening in life that doesn’t have much to do with comic books, I’m back to tell you about the weekly pull and what it has to offer. This week was pretty darned massive. It was a tough choice figuring out what to review, because there’s not a much of a point in reviewing part three of a given series, you’ve largely made up your mind by then. I’m more of a startup/wrapup sorta guy. I like to review the beginning or the end, thus chronicling the entirety of the story. Luckily I was able to find some criticism fodder in the pile this week.

And let’s hope I can remember how to do this! 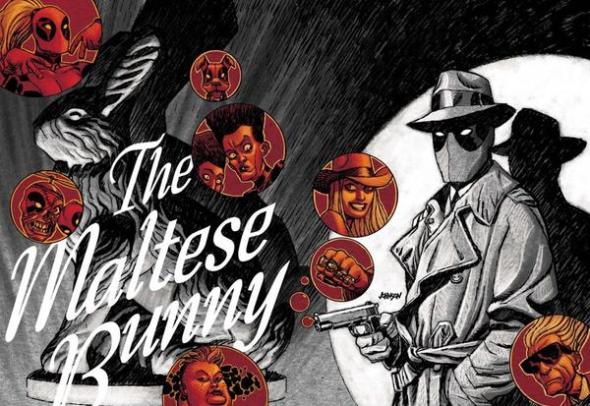 Let’s get this out of the way right now, this book didn’t need to exist. As such, it fits in well with the majority of the Deadpool books being published right now. The only difference, as far as I can tell, is that this one is actually pretty damned good. Unlike that 900 fiasco, which was largely hit and miss. Every segment in this issue was darned entertaining. Especially the Blackest Night parody which I feel was written just for me to warm the cockles of my still-beating black heart! Also of note is the Canada-man segment, which was downright hilarious.

I have to say that for the 4.99 price, you get a hell of a lot for your dollar. I mean, yeah there’s a superflous catalog of artwork showcasing Deadpool comprised of mostly covers from the Deadpool variant month that does nothing but add heft to the book and could have been tossed aside. But then again, this entire book is technically superflous as it adds nothing to Deadpool’s ongoing arc and is simply a showcase of Marvel talent having a go at the merc with a mouth.

One thing that stood out for me when reading this particular issue, is that it’s been so long since I saw Deadpool kill anyone that it was actually kind of shocking how much actual killing he does in this issue. I know it’s odd to say that, but it’s the truth, at least for me. It’s not a bad thing, it’s just kind of an interesting look at what Deadpool has become as opposed to what he began as. Something to ponder…

I need to reiterate that Jonah Hex is probably the one book I would keep reading if I dropped everything else altogether. Or possibly Secret Six, but we’ll get to that later. With this issue, we get what is essentially a poem about the nature of a bullet’s reason for existence juxtaposed against the wild west backdrop of Jonah Hex’s world. The issue deals with a revolving door of people with revolvers and the intent to use them and the consequences of their decision to cock the hammer.

It’s just the sort of thing that works for this book. It’s probably the most oblique type of subtlety you can get. You know there’s a message but with the shades of grey that our characters occupy, the reader can take the message in all sorts of directions. There’s been a lot of good literature written about the toll that the soul takes when confronted with the realities of vengeance and the guilt of taking a life. My next novel touches on just such subjects. Jonah Hex isn’t high literature, but it’s not schlock either. It’s almost the perfect venue to air such a debate. The book is as unflinching as the impact of a bullet.

Also, for no reason, here’s a picture of Jimmy Palmiotti as Watchmen‘s the Comedian taken from Dave Gibbons’ twitter:

After a brief guest writer spot, Gail Simone returns to write the six again in a weird little story that sees the group transplanted into the old west. It’s an interesting little what-if story that confused the hell out of me for a while because I spent more time than I did reading the issue trying to understand its implications. Were they in some sort of virtual reality? Were they transplanted through time? Is Gail Simone a timelord? Is this a one-shot or a full arc? Will we ever get another tub-sex scene as awesome as the one in this issue?

Seriously, it’s a perplexing issue. It’s interesting, just like the entirety of the series has been so far, but it’s jarring as all hell. There’s no segue into the issue, it just hits you and tosses you into this alternate reality with no regard for your brain’s safety. You just have to roll with it. Listen to Ragdoll’s little puppet show and shut your mouth, there is no refuge for you here.

Also, I totes have a crush on Cowgirl Scandal now. 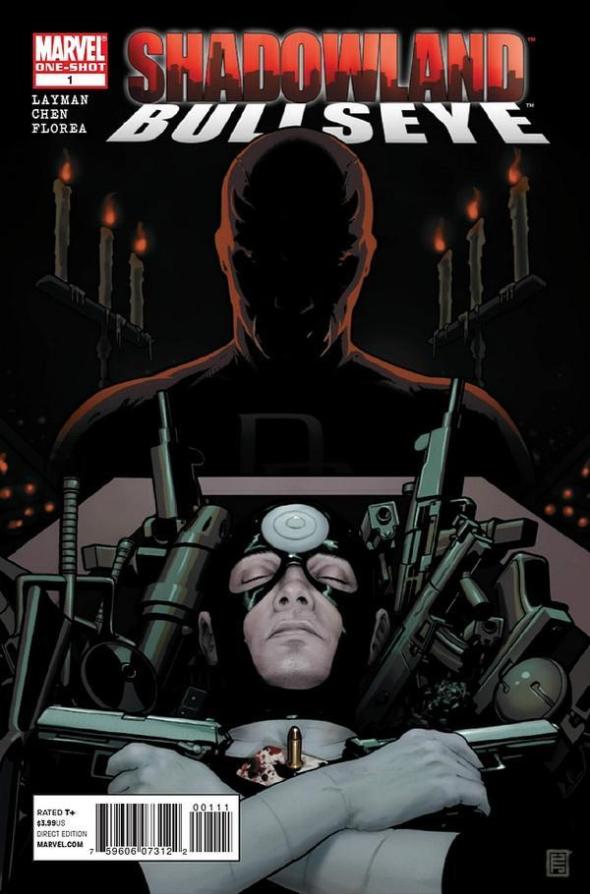 I was going to pass on ALL the Shadowland spinoffs. I was just gonna get Daredevil and the main mini-series and wouldn’t allow myself to get suckered down the long and winding road of books that I don’t normally read. That plan was torpedoed however when I noticed that this particular issue was written by John Layman, him of Chew fame. And so with full faith in the authorship I put the book in my stack, because I figured I’d regret it later if I didn’t.

The issue concerns itself with members of the criminal underworld hosting a funeral for the recently perforated Bullseye in the middle of Hell’s Kitchen Park with a kidnapped Ben Urich there to cover the story. The principle character in the narrative is a fellow who can supposedly commune with the dead, and the dead person currently on his telepathic telephone is Bullseye, constantly screwing with his head the whole of the issue.

I would say that this issue acts as an excellent sort of #1.5 interlude between issues one and two. It feels like a story that needed to be told. The underworld’s reaction to Bullseye’s death isn’t something that needs to mentioned in periphery, it’s an important detail and it deserved a full issue. We get the heroes’ reaction in Shadowland 2, but this presented a different perspective that I think readers will definitely enjoy.