After another brief hiatus the reviews have returned, and I’m sure you were all so worried that I’d never get back to the weekly review schedule. Well, here I am. I can’t say much for this week’s crop of books because it was a light week all around. Picking what to review was actually the hardest part of this little endeavor because everything I picked up is in the middle of an arc and if you haven’t made up your mind on a book by part four I doubt my little review is gonna sway you either way. If you do get to part four then read my review and go “well I’m not picking that up!” maybe I need to consider a career as a hostage negotiator.

Now let’s get this over with.

I praised the first issue of Avengers as a return to the classic feel of the title with a little bit of Bendis’ trademark style. Four issues in, I still get the classic vibe but I don’t so much think that Bendis’ Bendis-ey tendencies (that’s an odd rhyme) are all that suited for this sort of book. Contrast this with New Avengers where he’s really feeling his groove and hasn’t lost a beat since the last volume and you can see where he feels more comfortable. Bendis likes to do epic on a small scale. Epic as it pertains to the individual or a group of individuals. In New Avengers, it’s really Bendis’ statement on how Cage has grown as a leader and Doctor Strange’s role in the world of magic. You can boil the importance of the arc down to two characters, in essence. With Avengers it’s a little harder to do that. And while it’s still a good book and an interesting read, I’m not sure if it has Bendis’ singular focus. However, Bendis does get major brownie points with me for his use of Killraven. I mean, when was the last time we saw that guy? All I know is that its cool that he’s getting a little face time because I think he’s a great character.

Where I’m sure I’m going to lose alot of you is my feelings on the artwork. Now, I like JRJR, I think he’s a great talent and he’s practically synonymous with Marvel. That having been said, his work here looks rushed. I don’t doubt that he was rushed. But this is the Avengers we’re talking about. The Avengers should have the best art in the damned company as far as I’m concerned. New Avengers looks amazing. Avengers looks like a sketchbook that’s been colored in. There’s none of the finished nuance of his work on Amazing Spider-Man or KickAss (though Kickass took like three years to finish eight issues, so he probably wasn’t as rushed.) But all the same I would rather the book come out every five weeks to give the man some extra time than have an Avengers book that looks like it was drawn by someone with shaky hands and blurry eyes.

The book is still strong, it’s just weakened by Bendis being out of his comfort zone and Romita’s art running at about 50% his usual standard. But it’s good to have the real Avengers doing stuff that the real Avengers would do. Thor smashes a martian spacecraft in this issue. That’s the Avengers I love. 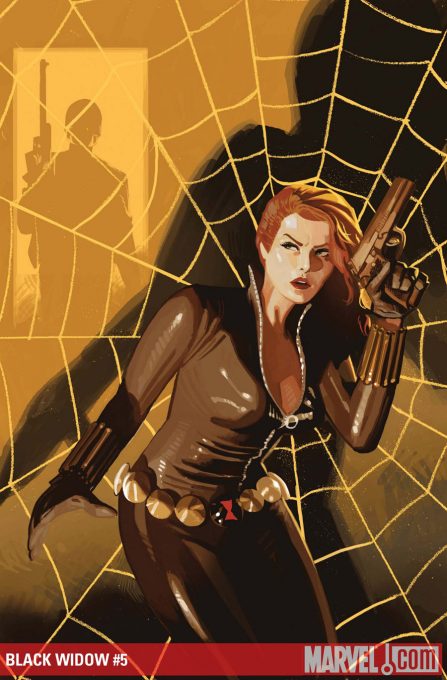 Marjorie Liu finishes the first arc on Black Widow as well as her tenure on the title with the fifth issue here. Next month Duane Swiercanspellhislastnameski takes over and crosses the title over with Hawkeye and Mockingbird. I don’t know what the tone shift between the two writers will be like but I’m pretty sure it’ll be minimal. This issue basically serves as a 32 page “exhibit A” as to why Black Widow is a badass. She does a lot of ass kicking here, and proves that in addition to being a spy and an Avenger she’s also a pretty good nude bondage model. (Yeah, I’ll scan that panel later, I promise.)

They’ve done a good job with this book. Black Widow isn’t the most amazing character in the world. She’s essentially a female Jason Bourne at this point. Effecient, badass, and portrayed by an A-List actor on film. As far as the writing on the book is concerned, Marjorie Liu is able to pull together the personal narrative with the spy action well enough that you’re left wondering why Black Widow hasn’t had a monthly title for so long. If there’s one thing that she does right with Natasha it’s that she makes her an organic and viable character that has room for years worth of stories based just off of the work in this introductory arc. Whatever comes next, it won’t feel like they’re trying to cash in on the character because of her appearance in Iron Man 2 but instead because there are stories that need to be told based off of what has been established.

I’m not sure what Duane is going to bring to the book, but he has big shoes to fill. Actually, I don’t know what size shoes Marjorie Liu wears. He’s got a lot to live up to that’s for sure. I expect at least one more equally awesome cold-storage bondage moment out of him before I think he’s anywhere near Liu’s level.

When I first picked up Shadowland I promised myself I wasn’t going to get the tie-ins. I was going to give Marvel the finger when it came to the side-books that had no real bearing on the actual story. Now we’re about two months in and I’ve gotten every tie-in they’ve released so far. Congrats Marvel, you’ve got your hooks so far into my hide that I can feel it in my colon. Anyhow, it’s not a bad thing because every tie-in book thus far has been worth the money. I haven’t been let down by anything in the Shadowland pantheon as of yet. I picked up this one because I was hoping to figure out where Moon Knight plays into the whole thing and how he wound up in the underground prison in the main series.

While the book does address those issues it also seems to focus on the themes presented in the Vengeance of Moon Knight book with Moony becoming a less violent hero and Khonshu taking it the wrong way, seeing as how he lives off of the blood that his avatar delivers to him through acts of vigilantism. I assume I’m getting that right, Moon Knight can be confusing sometimes. So Khonshu is haunting Moon Knight in his dreams and his waking hours in the visage of a gigantic chicken (I know he’s not really a chicken, but he looks like one and I find that funny) and another nutjob is running around as the “Shadow Knight” giving Khonshu the blood he wants and making Moon Knight feel all guilty. It’s a damned odd book but the way they weave it through the Shadowland tapestry makes it worth picking up.

Also, I guess Quesada pulled the stick out of his ass about the smoking edict because one of the characters is perpetually puffing away in this issue and that kind of made me chuckle.

Well, that’s it for this week. I’ll be back next week with more unless I get another superflu of some sort. If that happens I swear I’ll never leave the house again.