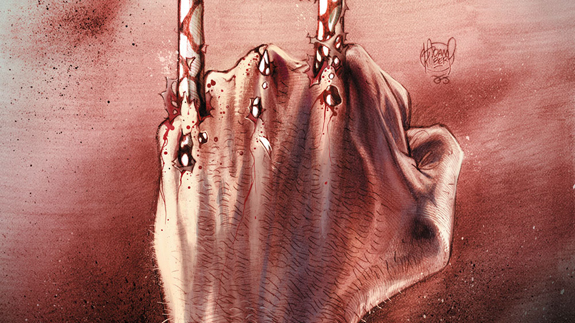 DC set the comic retailing world on fire with their 3D covers for villains month. The demand outweighed the supply and left speculators frustrated and store owners angry that they couldn’t milk more money from the situation. Well Marvel looks like it wants to get into the game of wacky covers yet again as they will be running Acetate covers for Wolverine Origin II, written by Kieron Gillen and due out later this year.

Set a few years after the events of Origin, Origin II finds James Howlett running with the wolves…until something unexpected brings him back into the world of men! Follow the first “X-Man” as he finds his way back to civilization and falls afoul of someone Sinister, who’s just discovering mutantkind and the horrors he can visit on them. Written by comics superstar Kieron Gillen and drawn by industry legend Adam Kubert, Origin IIcontinues the proud tradition of revealing Wolverine’s shocking history in the highest quality possible!

Acetate covers, for those who don’t quite remember are a slick, shiny plastic sheet. The best example would be Marvels or going further back The Last Avengers Story. So far only Origin II is slated for an acetate cover. No word on if holograms, die-cuts, and randomized trading cards are going to make a comeback as well.

This entry was posted on September 13, 2013 by J. Goodson Dodd. It was filed under Blog Posts, News and was tagged with Acetate Covers, Comics News, Kieron Gillen, Marvel Comics, Origin II, Wolverine.