Every week I plan to bring you my personal reviews of the week’s releases, hopefully in a timely manner. This would be easier if Marvel and DC still sent out those preview copies a week ahead of time but those are a distant memory, like good hip-hop.

Here begins another chapter in the “Gauntlet” arc of Amazing Spider-Man, detailing one of the viallians who I felt should have been included in the film series somewhow (and hopefully will be when this reboot gets going), the Rhino. Why do I like the Rhino? Because he’s got that classic element of emotional scarring through physical trauma that I like my villains to have. (See also Two-Face, Killer Croc, etc.)

Here we see Rhino doing the whole “I’m a good guy because I found a woman” routine and we’re introduced to a new character taking up the Rhino moniker. How many of the original Spider-Man rogues are actually the people they were when they debuted nowdays? Kraven and Scorpion have been replaced by younger more female-type persons, the new Vulture spits acid blood or something like that, now the Rhino is getting an overhaul. I’m not complaining, though. When it comes to the stories presented, if you’d been beaten up by Spider-Man for years you would likely abdicate your cirminal moniker too. The old guard fading away is a big part of what makes certain stories work. By progessing the villains, you progress your hero by proxy. It works.

The main story here is a bit hollow, aside from the fun interplay between Peter and Norah, there’s not much meat to the story. It’s clearly a setup for what will follow in subsequent issues. Even the advancement of Rhino as a character isn’t truly fleshed out until a very well done backup story after the main meat n’ potatoes of the lead-in.

Again, I seem to like where all this is going, and I attribute that mostly to Joe Kelly who is an underappreciated writer in many ways, but I think my feelings toward this issue will be altered one way or the other by how it is followed up down the line. 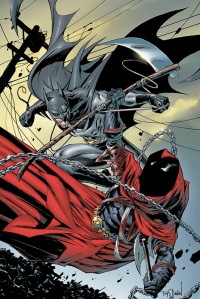 I’m going to try not to review books, such as this one, that are in the middle of an ongoing arc if I can avoid it. That having been said, I think this issue finally revealed what I’ve been feeling about the “Dick as Bats” experiment and made me grasp what had only been an inkling until reading a few panels presented here; I forgot that Bruce was gone.

Tony Daniel has been doing something that seems to counter-act what Morrison has been doing in “Batman & Robin.” Whereas that book works off of the relation between Damien and Dick and how both are coming to terms with Bruce Wayne’s absence, the main Bat book goes long stretches where Batman is doing his thing and the inner voice of the character is 100% identical to Bruce, generally speaking. It feels as if Daniel is writing Bruce Wayne as Batman and then out of nowhere we are reminded that it’s not Bruce.

Part of me thinks it’s written this way to make the reader accept Dick as the subsitute, leaving the reader in a comfort zone and not changing the tone of the character in any major way. Another part of me thinks that Daniel is not as experienced a writer as he is an artist, and therefore has trouble writing discernable voices for multiple characters. He doesn’t write Dick in the suit, he writes the suit, so to speak.

The book itself feels like a book out of the 80’s or 90’s. It’s very self contained to it’s own universe and almost a slave to it’s own past. The art is solid, which I attribute to Daniel basically writing to his own strengths, seeing how he’s handling the art along with the scripting. It’s refreshing to read a fairly straight-forward Batman narrative again, even if we know that it’s techically just filler until Morrison pulls Bruce out of the past and re-inserts him into the now.

Why are you not reading this? It’s such a great book. I know a few people must have been suckered in during that Blackest Night crossover, but that’s just not enough. This book craves attention. Just like Booster himself, this book is constantly seeking validation. It shouldn’t, because it’s just plain good and that should stand for itself, but everyone should read this book at least once.

This issue is a great place to start. It’s a good jumping on point, with Booster and his sister delivering a nicely done exposition dump and getting everyone back up to speed. The story centers around the “if you travel to the past you can’t change anything” device and takes a look at how, if given the opportunity, such things might play out in the DCU. In this case, it’s trying to avoid the Cyborg Superman Coast City disaster. With time travel being a regular staple of the DC universe, it’s suprising that we don’t see more stories centered around the government or certain heroes trying to go back and reverse history. I mean, Superman flew around the world so fast he turned back time in the original Superman film, so it’s not like it hasn’t been thought of, but Booster Gold seems to be the only series that bothers to look at certain angles of the time-travel element.

I think that’s what I’ve been liking so much about this book. Aside from the Blackest Night tie-in, the book completely covers its own little niche of the DCU that nobody else tramples on and the book acknowleges and presents a reasoning for occupying that very same niche. It’s clever writing at its best and the fact that it makes logical sense is refreshing, especially given what goes on in certain parts of the DC publishing web.

I think out of all the resurrected titles that came about because of Blackest Night, Catwoman was the one I was most looking forward to. I was terribly disapointed when they cancelled the book in the first place. Seriously, it was a solid book and it didn’t need to go away. I love Gotham City Sirens, and that has helped to lessen the blow but crowding the book with three leads makes it hard to really focus on any one character’s needed arcs. It’s almost as if that book was meant to introduce a new status quo in a manner that we all slowly forget what came before and only focus on the current developments.

Resurrecting the Catwoman title proper, allowed the reader to get a little closure in regard to the Black Mask murder storyline that pretty much dangled after the cancellation of Selina’s title. This book puts the endpiece on that particular storyline and organically presents a followup that can be built upon in “Sirens” down the line.

While the Blackest Night banner seems to indicate a quick cash-grab in bringing books like Catwoman back, the content and the fact that it is used to further the development of the character and put old business to bed justifies their existence.

There are Nazis. And I don’t really understand much else. Part of me wants to peg this book as a sort of T&A throwaway book but, there’s not actually much T&A on display. It’s really just an oddball fun book that isn’t too deep or well constructed, but it’s a fun read in the end and considering I only picked up the first issue because the cover looked interesting and I’ll buy anything with Nazi’s as the villain (see also Hellboy) I can’t complain too heavily about what’s presented between the covers.

I recently named Fraction’s “World’s Most Wanted” arc one of my favorites of 2009. He’s still continuing that with the “Stark Disassembled” arc here, but I can’t help but have flashbacks to that season of The Sopranos where Tony was in a coma and we spent so much time in a dream world that interest soon started to dwindle.

I predict that the end of this arc will make me do a little fanboy squeal but if I do I won’t tell you about it because I’d like to retain some of my objective dignity, of which I have very little.

Jubilee. That is all you need to know.

Holy fuckshit Jason Aaron is impressing me left and right. His Weapon X book is the best Wolverine in years and now we get a Punisher story that lives up to the legacy that Garth Ennis left with “Welcome Back Frank” without completely aping everything that Ennis did with the character.

The smartest thing Aaron has done is focus more on the Kingpin than on Frank Castle. We’ve seen everything in Frank’s arsenal, honestly. But this new Kingpin is an unknown entity. By establishing this new character and framing the development through the lens of the Punisher and the thugs on the street, we are left wondering if this Kingpin is going to wind up like the rest of the Punisher’s rogues and be dead by the end of the arc or if we’ll finally get another recurring villain worth getting excited over. Ennis gave us Barracuda and The Russian, it seems like Aaron is trying to do the same thing with the Kingpin, and give us a new recurring foe who isn’t named Jigsaw.

This book is everything you could wan’t in a Punisher story. It also has saggy old lady tits, though I’m not sure if that counts for the book or against it.

Ultra Magnus is a dick and a half. Seriously, the guy is so oblivious to his own dickishness that he makes Silver-Age Superman look like a cognitive genius. I’m not exactly sure what continuity this book follows, considering that I haven’t read a Transformers comic in ages, but if there’s one thing that all of them share it is that Ultra Magnus is a total douchebag and he doesn’t even know it. Also Hot Rod.

This book is frustating for me in that I feel as if nothing seems to happen in any of the issues until the final page. It’s like 31 pages of filler and then shocking cliffhanger. It is already getting tiresome. That having been said, I like the angle they’re playing where the Autobots and Decepticons put aside their differences out of a shared sense of nihilistic apathy/exhaustion. It’s basically as if both camps said “screw it,what else is on TV?” It’s different, at least to me, and story structure aside, I want to see where it leads.

And that wraps it up for this week’s reviews. I would like to finish the post with something witty but I really want to finish watching LOST on bluray, so that isn’t gonna be happening.