I am sure that most of you who read this blog are familiar with Rich Johnston. He of Lying in the Gutters and BleedingCool infamy. He was one of the first community personalities to comment on one of my stories when I reviewed a book he wrote for Image when this blog first got underway. I basically accused him of being a gossip-monger masquerading a journalist in the comments he pretty much said that he rejects the idea of himself as a journalist. Which is good because the way he conducts himself sometimes makes him seem more like a court jester than a reporter. But looking back at that and looking at the way I run this blog I had to think of how I look at myself and what my goals are in bothering to post anything on this site.

I’ve obviously reported the news in the past. When something big happened I tried to make sure that I got it posted and spread around. I know that I’ve never broken any important stories but I felt that it was an obligation to treat stories about major happenings in a certain way. I guess I hoped my little blog would be something akin to an underground ComicsAlliance. I may not agree with their snark 50% of the time but I won’t deny that they have the contacts and the resources to handle the journalistic side of the medium. They’re 100x better than what we got with Wizard, anyhow.

But looking at this past year I’ve been posting fewer and fewer big news items unless they strike me as important enough to write a real opinion piece about. I still write reviews because I enjoy getting my opinion on the record and establishing why I feel a certain way. It’s not a matter of routine for me the way the news posts were. And so I’ve come to the conclusion that CCQ is, at its heart, a blog. And as such I have begun making plans to transition it into a full blown commentary hub. In the coming weeks I hope to be posting far more smaller pieces just to start discussion among my readers. And despite my slowdown in posting I’m still getting a sizeable amount of traffic for a small one-man operation such as this. It’s not a million unique visitors a day but it’s still enough to make me happy I bother to type these things out.

So expect things to go a little differently around here soon. Hopefully for the better.

Spider-Girl Ongoing Downgraded to Mini-Series; or Curse You Marvel, Why Do You Hate My Soul? 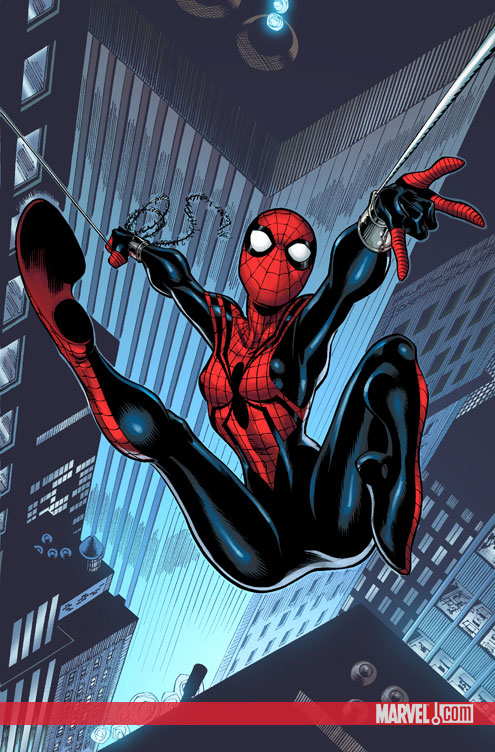 Rich over at Bleeding Cool has once again broken some interesting Spider-Girl news. This time, though, it seems as if the news is not happy and as such that popping sound you just heard was every blood vessel in my brain exploding in unison. You’ll have to excuse me for a moment while I mop up the mess that just globbed out of my ear canal.

Now that I’m back, let me state emphatically that I’m a heavy Marvel guy. In my recent paring down of my pull list, where I cut back on books that simply felt superfluous, I was surprised how many of those books had a DC logo on them. I’m not anti-DC by any means, but I was a little surpised at how far my list skewed to the Marvel side. Now, that having been said, I’m starting to feel like their company has started a division simply aimed at frustrating me on a personal level. Like someone reads this blog on a daily basis, reading my nitpicky criticisms and storing them away to use against me in some Machiavellian plot of doom.

A while back I posted about SWORD’s cancellation and it bothered me that Marvel didn’t even give the series a chance to sell in trade to make up its audience and keep it going on a monthly basis. I felt that such a move was short-sighted and not in the best interest of the company. Falling back to the old standbys and relying on overhyped event books will only keep them afloat for so long. People need diversity in publication to remain interested. It makes Marvel look weak when they cut the life of any book short before giving it any real chance to find its legs.

Marvel has decided to cut the new Spider-Girl series down from an ongoing into a mini-series, which to me indicates a total lack of faith in the book, even pre-launch. The problem with this of course, is why even produce the series in the first place if you’re going to backpedal and essentially show your consumers that you could care less about the property. Moves like this show a lack of backbone on the part of the publisher. Some critics would argue that we should be happy to be getting whatever we can get, but I say that we deserve better than an afterthought.

It’s a slap in the face to the fans who supported the character through a hundred issues the first time around and twenty five issues in her last incarnation. Find a way to make us feel like we matter. Because we do.