Greetings from Austin, Texas where I’m having just a huge blast at the Wizard World Austin Comic Convention. Our first day here has been productive, as I’ve procured commissions from Mike Grell as well as Chew artist Rob Guillory. We ran into our good friends over at Angel Comics pretty early and if you’re in town for the convention be sure to drop by their booth and mention that you read about them on this blog. I try to give the guys as much publicity as I can muster because they do some great work and hopefully they’ll all be big names sometime in the future.

Met up with and got signatures from Mike McKone, Michael Golden and Greg Horn. All of whom are great guys who do great work. If you’re not enjoying McKone’s work on Avengers Academy you’re just plain wrong. Or not reading the book, either way you make me sad. Golden signed the first issue of Micronauts for me, which will be hung with care beside the original art page from a later issue of that series drawn by Gil Kane. I was happy that Greg Horn made it to the convention today as he was twittering quite ferociously yesterday about travel issues at the airport he was flying out of that included a plane on fire. Not his, mind you, but still a flaming plane.

Managed to snag a decent copy of Conan The Barbarian # 1 for about 1/2 of guide price for myself and then decided to retire for the day because there weren’t any panels I was particularly interested in, although I will probably get into one or two tomorrow if I can possibly manage it. I know I’m meeting up with a friend for lunch so it’ll be a task to juggle the scheduling. 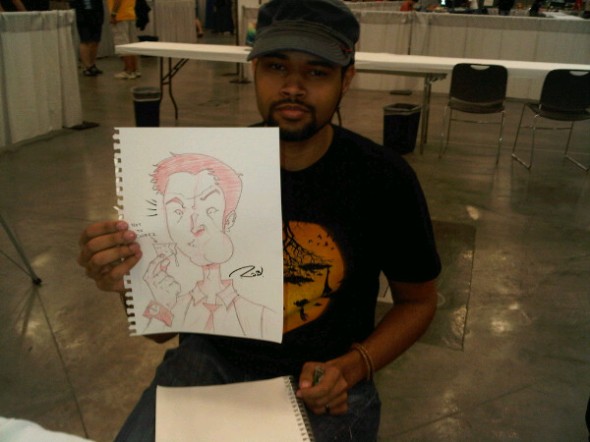