I am a pretty big fan of Conan. The current run at Dark Horse by Brian Wood is some of the best work the character has seen in a long time. The fact that he had some stellar runs by Kurt Busiek and Tim Truman prior shows how highly I think of the title at the moment. Now, Red Sonja has also recaptured my attention as of late. Gail Simone is doing some amazing work with the character at Dynamite. I admittedly fell off of the title a while ago, around the time they launched Queen Sonja if I recall correctly.

Now, as fans have been demanding they do so, they are coming together again for a multi-company crossover event with Gail and Brian working together to craft a story for our sword wielding heroes. CEO of Dynamite Nick Barrucci had this to say;

“Red Sonja and Conan are the power-couple of fantasy comics.  They define the genre together, the iconic figures by which all others are measured.  Their history is intertwined, and I suppose it was only destiny that would lead them together again.  Well, that and a lot of planning alongside great folks like Mike Richardson, Gail Simone, and Brian Wood and the editorial teams from both of our companies.  And the timing could not be better as this is a huge cross-over to hit as we go into our 10th Anniversary.  We couldn’t be more pleased to see the Robert E. Howard legacy made whole again with two Hyboria-shaking crossover events.”

I could not agree more. The current climate is perfect for this crossover. Brian Wood is set to wrap up his run and Gail is just making her mark with the character. Interest is at a high point for both characters and creatively we couldn’t hope for much better. Brian Wood was quoted as saying;

“Conan and Red Sonja together are a genre dream team, and I’m looking forward to not only working with Gail on the story, but creating a crossover story that is epic and huge as these things should be… and something that matters, that’s relevant, and adds something to each character’s rich history.”

With Gail of course adding;

“It’s only the crossover that readers have been begging to have for over a decade: the two greatest barbarian adventurers ever created in an epic tale of blood, lust, and vengeance.  This is the kind of stuff that made me a reader in the first place, and working with Brian Wood and his amazing version of Conan?  It’s just a sword-and-sorcery dream come true.  It’s sword vs. sword, Cimmerian vs. Hyrkanian, loincloth vs. bikini, and it’ll probably be the most fun you’ll have reading a comic all year.”

So if you’re not excited yet, you should be! 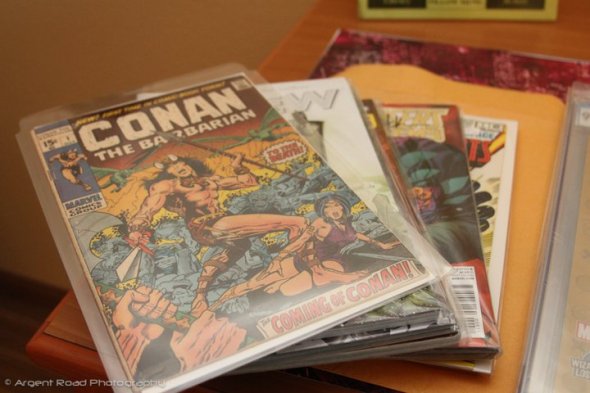 On the third day of the convention my mission was simply to buy the things that were on my shopping list. I had a chunk of Jimmy Palmiotti’s Jonah Hex series I needed to fill in, as well as some Hellboy trades and I wanted to get a damned copy of the first issue of Conan the Barbarian at a reasonable price. I was able to pick one up for around $70.00, the going price for one in that condition being close to $120.00 so I was content. I managed to snag one of the Hellboy trades and most of the Hexes. With the money I had left over I decided to support our friends over at RED 5 COMICS and buy one of each of their trades. I’m planning on tearing through Atomic Robo sometime within the next few days.

After scouring the convention for the items on my shopping list I picked up the few remaining commissions I had not collected on and said goodbye to the professionals I’d annoyed throughout the weekend. Stopped to get my requisite picture with the Suicide Girls who I try to say hello to at every convention because as a photographer I keep hoping one of them will request my services. They directed me this time to their application site, so I might give that a go.

Now I’m back in Houston and looking to recharge by going back to work. At the comic shop. I think I might need a hobby away from my hobby.

Greetings from Austin, Texas where I’m having just a huge blast at the Wizard World Austin Comic Convention. Our first day here has been productive, as I’ve procured commissions from Mike Grell as well as Chew artist Rob Guillory. We ran into our good friends over at Angel Comics pretty early and if you’re in town for the convention be sure to drop by their booth and mention that you read about them on this blog. I try to give the guys as much publicity as I can muster because they do some great work and hopefully they’ll all be big names sometime in the future.

Met up with and got signatures from Mike McKone, Michael Golden and Greg Horn. All of whom are great guys who do great work. If you’re not enjoying McKone’s work on Avengers Academy you’re just plain wrong. Or not reading the book, either way you make me sad. Golden signed the first issue of Micronauts for me, which will be hung with care beside the original art page from a later issue of that series drawn by Gil Kane. I was happy that Greg Horn made it to the convention today as he was twittering quite ferociously yesterday about travel issues at the airport he was flying out of that included a plane on fire. Not his, mind you, but still a flaming plane.

Managed to snag a decent copy of Conan The Barbarian # 1 for about 1/2 of guide price for myself and then decided to retire for the day because there weren’t any panels I was particularly interested in, although I will probably get into one or two tomorrow if I can possibly manage it. I know I’m meeting up with a friend for lunch so it’ll be a task to juggle the scheduling.

I’m a comic fan. I read the books, I follow characters and creators specifically, I have a friggin’ website dedicated to projecting my love/criticisms of the weekly books, but I do not consider myself part of any “fandom.” I don’t claim any character as my own the way some people will (though I will pimp Jubilee and Dazzler any chance I get. UNDER APPRECIATED I SAY!). My recent forays into the world of Tumblr, which is in and of itself a harmless site, have led me to some places that I don’t want to go again. It is a streamlined portion of the internet hate machine the likes of which is not often seen.

I mean, yeah. Look, I can see where it’s funny. I don’t think it’s really meant as a direct statement that books like Birds of Prey shouldn’t exist. I doubt the person that made it gives two shits either way and was just trying to get a laugh. But this thing immediately got reblogged by like eighty bajillion folks and the feminist hordes who champion books like Birds of Prey and Wonder Woman started gnashing their teeth and getting overprotective. And it was at that moment that I had a sort of realization about comics and their part in the readership’s everyday life.

I realize that a healthy portion of the comic reading population latches onto a particular title or character because of how they can relate to the characters within. That is the sign of a character’s strength in their ability to resonate with the reader. But I’ve noticed that any percieved slight against a character or a book is taken extremely personal by the people who have claimed that character as their own. You do NOT want to see what some Wonder Woman fans are saying on Tumblr right now in regards to that new costume. Jim Lee and Stracynski might want to avoid going into public spaces for a little while.

I’ve been accused of taking comics too seriously in the past. I immediately hung my head in shame because that’s the last thing I want to do. When you start taking all of this too seriously, you come off as the kind of fan that the nightly news mocks when they cover a comic convention.

I’m not saying that you can’t be passionate. But the average fan-person seems to deal in black and white absolutism when it comes to “their” character. That anything said that goes against the grain of their definition is inheritly wrong. Is that graphic above insulting to women? Certainly, it’s meant to mock and insult. Was it malicious? I can’t immediately assume so. I’m sure there are plenty of female comic readers who have made similar jokes about the chest-thumping over-wrought masculinity of something like Conan the Barbarian or something similar. I love Conan, I’d probably see such a graphic and say “Heh, yeah,” not call for the burning of male genitalia on a social networking blog.