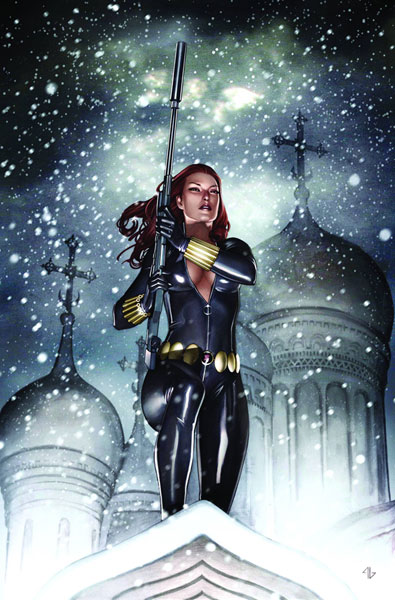 It’s plain to see the logic behind releasing this mini-series when they did. Marvel has their tentpole film slated for a May release and it’s set to feature new characters who are bound to click with at least a portion of the general populous and one of those characters will assuredly be the Black Widow. A hot redhead in a tight bodysuit kicking all kinds of ass? Yeah, people will be hip to that.

And so this miniseries will be right there on shelves in Marvel’s Premiere format hardcover by the time the movie hits theaters, ready for anybody who might want a digestible series about the character readily available to them with little to no prior knowlege of the Marvel comics universe necessary for them to enjoy it.

Of course, at the same time, the new ongoing series will be hitting shelves and Marvel is hoping that some people cut their teeth on that title as well. Using the movie and this mini-series as a springboard to launch their foray into the world of monthly graphic literature. Will it actually work? I don’t know.

That having been said, the mini-series itself is pretty much everything you could want from the character. It’s scope is long and epic and integrates the character into every facet of the Marvel universe. She crosses paths with just about every major hero in the lineup and it didn’t feel like say, the Wolverine Origins film, where they were simply namedropping people left and right at random.

The great thing about this series is that it has a very classic feel to it. It’s sort of like a Fleming James Bond novel in it’s adherence to the spy-thriller genre. I take it that has a great deal to do with British writer Paul Cornell, who hasn’t written anything for Marvel yet that I didn’t enjoy on some level. He manages to make the book accessible to new readers while at the same time making the series seem integrated with what Brubaker has done with Captain America as well as with the overall tone of the Marvel Universe at large.

The art is simply amazing as well. And that’s saying something considering that there are different styles used to set the tone for different time periods in the Black Widow’s life. Her time spent as an Avenger looks and feels completely different than her time spent with Daredevil. It’s a stylistic choice that isn’t revolutionary, but it’s refreshing to see it done well, as so many times the effect isn’t a different tone but a jarring shift that seems out of place.

So would I recommend this book? Absolutely. And I give it high marks for being a book I can recommend not just to comic afficianados, but also to newbies. That’s no small accomplishment, as many have tried to do such a thing and fallen on their asses. Hard.

So I’ve been battling a cold that’s primary affliction to my system has been a severe sense of apathy. I don’t think I’ve ever moved slower on a Wednesday than I did at work yesterday, but when the fever broke in the night I realized that I had a blog to update, and thus I started work on this week’s reviews, which will begin momentarily. 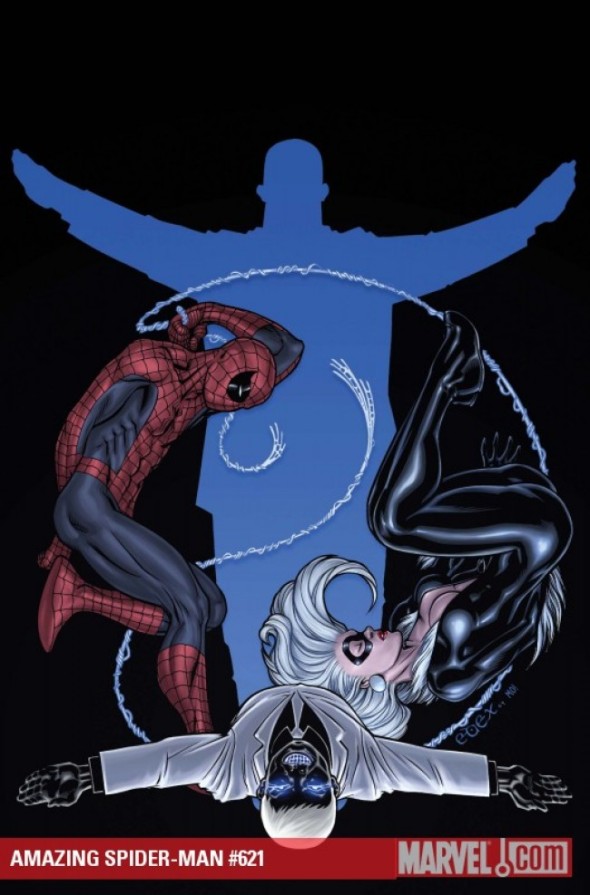 I feel like I’ve heaped sufficient praise on this book over the course of it’s “Gauntlet” storyline. This issue is worth picking up for Michael Lark’s art alone. That man could draw Daredevil making a sandwich for 32 pages and I’d buy two copies. (Grilled cheese variant?)

This issue catered to me in numerous ways. It had Black Cat, who I effing love. It had Mr. Negative, who I honestly believe is one of the better additions to Spidey’s rogues gallery that we’ve seen in the last few years. Honestly, it was just a good Spider-Man comic. And while the previous few issues have felt decisively like old-school Spidey, this one feels frighteningly modern, and I think alot of that comes from Michael Lark’s artwork. While not overly realistic, the tones are muddied and contrasting as opposed to the clean cut-and-dry work of the last few issues. I like both styles, and the art definately worked for this story, but the change is a litle jarring when held up to what had come before. The saving grace comes in the form of the writing, which doesn’t shift tone nearly as radically and keeps the story on course.

Again, I really only have good things to say about this series at this point, and if you’re not picking it up I think you’re probably just still bitter over the One More Day angle. We get it, you feel slighted, but at this point you’re just denying yourself some quality entertainment with a character you claimed to love. 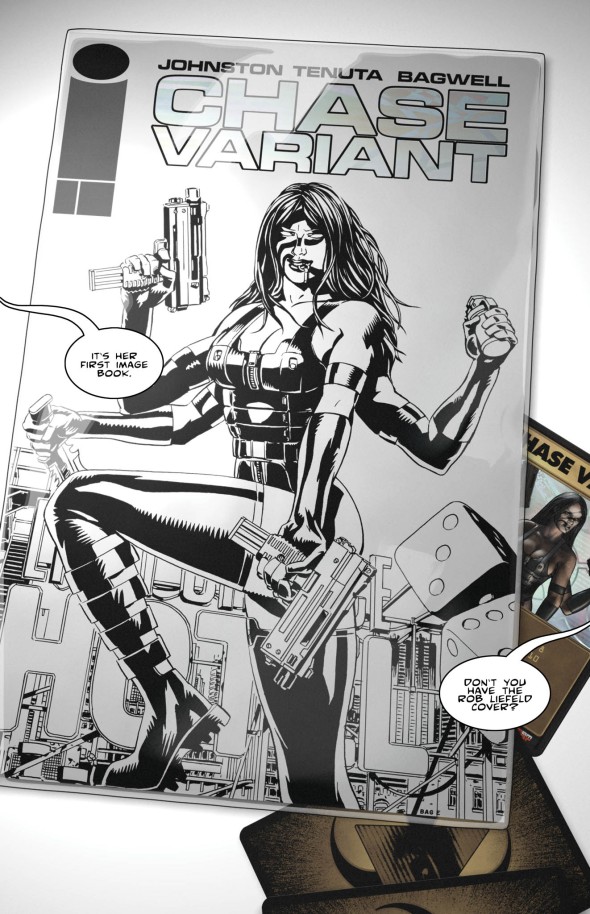 Rich Johnston is basically what would happen if I went around shouting a bunch of stuff I heard and considered it hard journalism. I won’t deny that the man gets his shit right every so often, as the man does have some sweet hookups and his site is a go-to for many people. I consider him and people like him to be the reason that Wizard has lost it’s relevance to the comic community and that in itself sort of makes him relevant.

Does any of that qualify him to write a comic book?

I don’t know. If it does, I’m hoping someone at Image calls me because I’ve got a great pitch about a Texas ranger who fights ronin-Samurai in a post-apocalyptic California with the help of a cat named Asshole. (Seriously, call me.)

I don’t know if he’s ever written anything outside of an editorial before this book, but if he’s a newbie he didn’t do too bad for his opening shot. If nothing else, the book has a pretty cool framing device, with unseen hands dealing magic-style dueling cards that shape the flow of the narrative. Such a framing device would be especially interesting in an ongoing series, where it could be explained in detail, but as it is not an ongoing and simply a one-and-done sort of deal, part of me wonders what their purpose was. Though that’s just me contemplating what could be or should have been and not what is.

As far as what the book is, I would say that Chase Variant is decent but it feels like an anachronism. A sort of throwback to the 90’s Image that I never really got into. There’s no character development or plot that runs beyond a few lines of dialogue, but there is some well-developed imagery and the potential for impressive worldbuilding. Environment and aesthetic over true content, honestly.

That doesn’t mean that it’s rubbish, because at least the book feels like it moves forward given it’s limited frame of existence. It’s not like it treads water trying to stay afloat. The book may not be the best thing ever written, but none of the effort was phoned in and it feels genuine, which is more than can be said for some books. 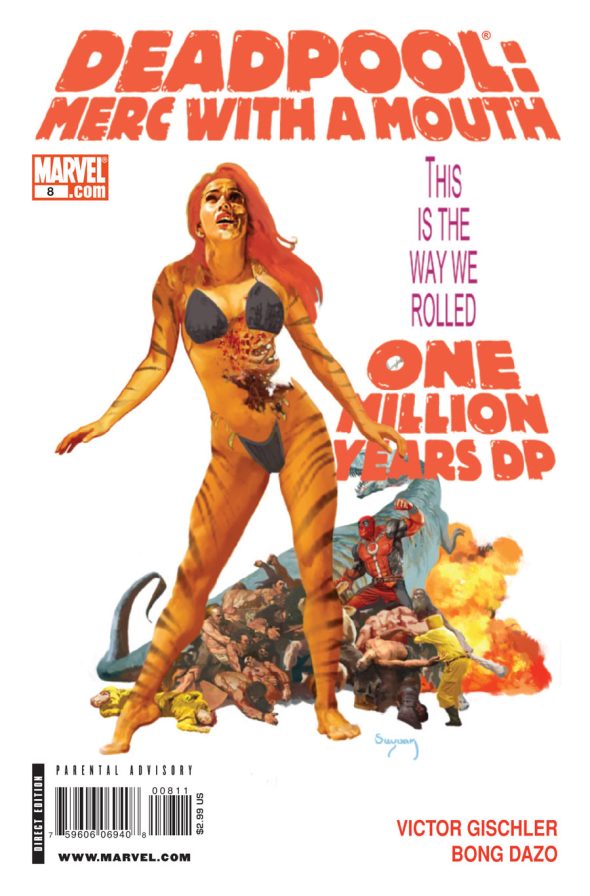 I’ve gotta nominate this one for turnaround book of the month, because the last issue to hit stands was downright atrocious. I was literally floored by how asinine that book was. This issue on the other hand seems to work well to regain focus and present a singular path for the book that I hope isn’t lost next month for some reason nobody can explain to me.

Instead of disjointed mini-sodes with a hodge-podge of different artists breaking up the flow, we get Deadpool and co. sucked into the Marvel Zombies universe where Deadpool goes all Tom Savini on a bunch of undead superheroes. The art is clean, crisp, and fits the tone preented by the writing and the jokes don’t completely suck the life out of the book.

Thank god, I was afraid I was going to have to drop this book. And how damned ironic would it be if after clinging to Cable and Deadpool because I didn’t want to see DP’s only book get cancelled would it be for me to be able to drop a Deadpool book and not be concerned because he has two other books I could read? I’d love to go back to the 90’s and drop that bombshell on someone. The look on their face would be priceless.

I’m glad that we have a Supergirl book that isn’t a horrible trainwreck. The current team has been doing a bang up job with the character, and though I’m not a big fan of the huge line-wide crossovers the Superman family seems to be enduring until the end of time, this book has been doing the best with what it’s been given from the get-go. The character development they’ve been working with Kara and Lana is refreshing, as both of them have drastically needed to be refocused for quite some time.

This issue feels like a good old fashioned Superman story to me. I mean, replace Supergirl with Clark and you would swear that this story belonged in one of those Black and White SHOWCASE books. Giant wasps? Lazer beams! GANGBUSTER?!?!?!

The backup story is short and essentially unnecessary, but the tone was on the money and I’m sure putting Helen Slater’s name on the book bumped sales by a fair margin, though what size that margin is could be anybody’s guess. Either way, the total package was worth the extra dollar on the price tag. 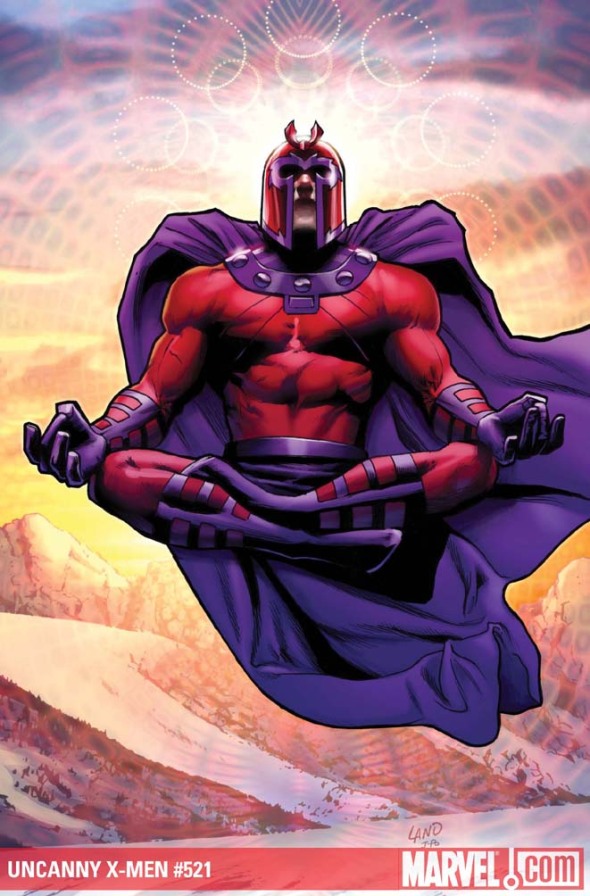 If all they had printed in this book was that final page, I still would have loved it. I won’t spoil it, but they made me a very happy nerd.

And I’m done for this week. Check back next time, when maybe I’ll review a comic that totally sucks. It’s kind of odd when I don’t read anything that makes me wanna hurl.