Yes, that is me trying to be Tony Stark. Eat it bitches.

So today was Free Comic Book Day or, FCBD if you wanna hashtag that shit on Twitter. I was up at Third Planet, as is my usual routine for such events. I snapped a buttload of pictures of the festivities and got to chat up some new people who came into the store basically as virgins to the world of collecting and comic books and general all around nerdiness. I think a few people walked away with the intention of coming back and hopping into some series sometime down the line. I know a lot of people who picked up the FCBD issue of Iron Man/Thor expressed interest in the new Avengers series and a few picked up copies of Iron Man Legacy and the newest issue of Invincible Iron Man, which really isn’t a bad place to start if you’re going to jump into collecting. Matt Fraction is a badass of the nth degree whose work I will pimp to the moon and back.

But then there are the people who came in simply to get the free book and nothing else. They took their one little giveaway and left, never to be seen again. Or, actually, we’ll see them again next year. I recognize some of them from last year. People who come in once a year to get something for nothing and then disappear into the ether from whence they appeared. The whole idea of FCBD is to get you into the store in the hopes that you’ll buy something else. Support the store that spent their money on the books they’re giving away. Third Planet even had a massive sale. 30% off on Trades and 25% off on back issues. No exceptions. And a healthy selection of people took advantage of that and for that I cannot thank them enough. I just can’t seem to wrap my head around the idea of spending the gas money it requires to drive up to the shop for a single free book and then leave without even browsing the selection in the rest of the store. If they have no interest in comic books or collecting, then why are they bothering with the free book in the first place? It’s sort of a break in the train of logic.

And again, I don’t begrudge these people, because in this economy I can certainly understand wanting some cheap and easy entertainment. But some people don’t understand what kind of work goes into organizing these kinds of events. Last year I was signing my first novel on Free Comic Book Day. I didn’t move many units because a number of the people who walked through the door, who admittedly wanted to try the book, didn’t bother to bring any cash with them in the first place. I’m hoping to use this post as a sort of educational measure, to inform the folks out there that it does cost the stores a healthy amount of money to buy all those free books, and that if they want us to run the promotion in the years to come, spending some money in the store couldn’t hurt.

Now if you’ll excuse me, I have to work on my Volstagg costume for next year. CAKE!

In case you were wondering where I’ll be this FCBD, there’s the promo flyer right there! I’ll have my camera with me taking pictures and generally having a good time!

I think a little background would serve well to illustrate why I am writing this entry. I am an English major, in addition to a comic enthusiast/shop manager. I published a novel early last year, that can be found on Amazon though I don’t ask that you read it, as there are literally thousands of books that you could better spend your time delving into. If you still wish to purchase it, I certainly won’t stop you, but you have been warned.

Anyhow, I’ve spent a good deal of the last few years reading different works of literature from a varied selection of genres and time periods, and in the course of my readings only one comic book was entered into discussion, that of course being Alan Moore’s “Watchmen.”

I haven’t taken a course centered around comic books, though I’m told one is offered at the university. I would like to take it if time permits, but here and now I would like to offer up the selection I would offer if I were a professor teaching a class on the intricacies of graphic literature as a medium. This will be a recurring column, with new entries added every week in the hopes of compiling a sort of omnibus of books that just beg to be read and analyzed.

Up first is one of the greatest pieces of graphic literature in the history of the medium. One of the longest running and critically acclaimed indy series in the history of comics, “Strangers” has the sort of intricate plotting that wins countless awards for cable television shows, blending humor and pathos with vivid characterization and close attention to detail that is unparalleled in a medium known for continuity flubs and retroactive continuity fixes.

Writer Terry Moore poured his heart and soul into this book for over a decade, and the care he put into the characters shows with every panel. That alone earns it a spot as worthy of study and dissection on a scholarly level. Any work that has such a lengthy run by a single creator is worth a cursory glance, in this age of revolving door creative teams. Add to that Mr. Moore’s masterful storytelling and wonderful art, both of which are astonishing in their realistic portrayals of human emotion and anatomy, and you have a book that could be dissected a million times over.

I had the good fortune of meeting Mr. Moore at a gathering for the 2009 “Free Comic Book” day event where I was signing my own book. A highlight of the day being when he jokingly referred to me as “a real writer,” when flipping through my clumsy prose. Aside from being one of the more talented creators in the medium, he is also a gracious and hospitible man who I was able to discuss, at some length, topics ranging from the local music scene to the state of comics both indy and mainstream. He clearly has a great deal of love for his own creations, and yet he never came off as a man of inflated ego.

“Strangers” is definately the kind of book that deserves to be studied. To be honest, a single issue of this series could be dissected for hours on end. The whole series would likely require at least a whole semester, if not two.

Next up is Brian Michael Bendis’ first appearance on this list, and believe me he will show back up again later. “Powers” is the kind of book that defines a writer’s style and sensibilities so well that every reader who picks it up knows what to expect out of that writer down the line. That isn’t to say that all of Bendis’ work is identical to “Powers” but it definately establishes Bendis as a writer whose main talent lies in crafting character voice and fluid dialogue. The people that populate the world of “Powers” are a diverse and eclectic group, with every character’s arc taking them somewhere that the reader may not have expected.

Bendis’ work here will make you angry. You will experience emotion while reading this book. In that, he is special. There are few writers who can write a book filled with people you actually care about. How many major characters have the big two companies killed off where the reaction you experienced was akin to passing a car wreck on the side of the road where your only thoughs are centered on how horrible it really looks without giving a second thought to the emotional weight of the situation?

That is not what happens in “Powers.”

Bendis writes a comic book that utilizes everything the medium has to offer in the forms of storytelling technique and at the same time writes in a manner that nobody else can quite nail down without coming off as skewed and off balance. Bendis has critics that feel his style doesn’t work within the traditional confines of the comic book medium, arguing that he comes off as dense and needlessly wordy, whereas I would argue that he simply knows how to tell a story and those who don’t like his style are simply too familiar with the tried-and-true mainstream storytelling methods to truly appreciate his work.

While his style doesn’t truly fit other projects like the “Secret Invasion” mega-event, where people expected a Michael Bay-style thrill-a-thon and instead got seven issues of Bendis’ hyper-realistic character interaction, books like “Powers” prove exactly how talented Bendis is as a writer. 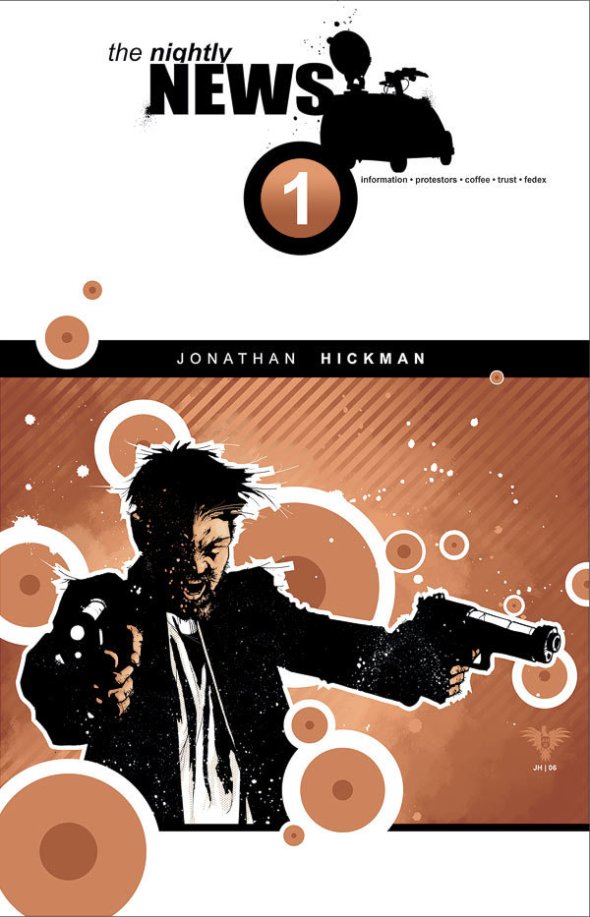 Jonathan Hickman is proof of evolution. Where Bendis, Kirkman, Johns, and a whole slew of others are the logical progression of what Alan Moore and Grant Morrison ushered in with “Watchmen” and “Doom Patrol,” Hickman is the evolution of the Image generation and the post-modern revivial of comics.

Where Bendis is all about the dialogue in the context of the medium, Hickman is all about manipulating the confines of the medium to fit the message and all of that can be seen on display in “The Nightly News” which is about as perfect a book as one can possibly fathom. It blends the sort of graphic design wizardry that has come about in the fast-paced media sphere we now occupy with the biting social commentary of the eighties boom.

This is a book that begs to be read and re-read in order to capture every detail. The truth of the matter is that the book is somewhat hard to read, because we as readers are not used to this sort of stylistic delivery of the narrative, but when you find the rythym that Hickman has created, the book cracks along at breakneck speed and weaves a tale that would not be done justice by any other creator.

Originality is the name of the game here, and I don’t doubt that others will shamelessly ape this approach in the years to come, because it really is quite effective.

That concludes the first installment of this series. Next week another selection will be added to the syllabus and if there are any suggestions that you’d like to see covered down the line, don’t hesitate to leave a note in the comments section, as I assure you I want to cover as many diverse titles as I possibly can.