Thank the little baby Jesus! I was afraid that my ability to enjoy a Star Wars novel was completely dashed upon the rocks when I read Children of the Jedi. I’m not going to lie. I had to read two random books just to get the damned taste out of my mouth. Luckily Darksaber is in another league altogether. I think Kevin Anderson just grasps the sort of narrative flow of the expanded universe better than Barbara Hambly. The characters and the flow seem to mesh better than in Children of the Jedi, despite the fact that he’s working with mostly the same characters. Callista is still a black hole for me, but that’s mostly personal preference. I feel like Anderson just wanted to write her off entirely but seeing how she pops up again in Planet of Twilight, again written by Hambly. I’ll assume that Hambly liked Callista more than I do.

Darksaber at first seemed poised to turn me off once again, as the “build another Death Star” plot point was not at all enticing. But the side-plots involving the return of Admiral Daala and her attempts to unify the Imperial fleet, which seemed like the logical course of action following the events of the last few books, was quite well written and probably the most engaging element of the book. I really didn’t care one lick about Callista and only truly warmed to the Durga the Hutt/Darksaber plotline about midway through the course of the novel.

I am going to state here and now that I have no intention of reading Planet of Twilight, as I don’t care about Callista and barely made it through Children of the Jedi so I’m going to call that one a bye-week and move on to the final installment of the X-Wing series instead. It’s my blog. I can do what I want dammit. 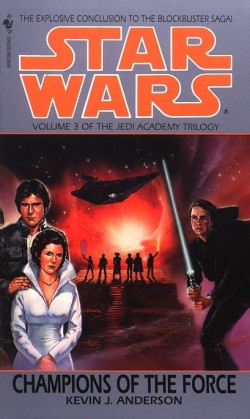 The Jedi Academy trilogy comes to a close with the most satisfying entry in the series by a long shot. Admittedly it’s still a fairly average book but it is a few steps above the previous two just in the manner which the action is handled. We jump right into the story with Kyp Durron flying the sun crusher to Carida in the hopes of finding out what happened to his brother. By now his RAAAMPAAAAGE!!![/archer] is in full swing having blown Admiral Daala’s fleet to tiny little pieces. What follows is a great back and forth between Furgan and Durron about his brother that ultimately leads to bad things happening on both sides.

Back on Yavin IV Luke Skywalker is still in a jedi coma after Kyp went all grimdark on him in the previous book, a moment that I still contend came out of left field and didn’t feel organic at all but the final book makes some strides towards correcting this by making excused through the strength of sith lord Exar Kun which ring a little hollow but also work within the context of the story. Durron flip flops so much that it’s not hard to realize that all of this was probably well thought out but not all that brilliantly executed.

The best parts of the book were the comedic moments that revolved around the crew manning the prototype of the third death star. (I know, a third one, real original) Their constant bickering and focus on procedure, being a bunch of laboratory science types, are a nice contrast to the machinations of people like Thrawn or Daala and make for some fun reading.

The final book wraps most of the plot threads up well enough although as with every installment there’s always the cliffhanger of where certain people will end up in the immediate future. In this case it’s where the final Star Destroyer left in Daala’s fleet will end up and what effect it will have on the core worlds. Everything else tidies up nicely and helps to relieve some of the bitter aftertaste left from the previous two installments.

This book leaves me conflicted. That’ll be the crux of this review, really. In most ways it is a definite step up from Jedi Search, just in terms of pacing and narrative engagment, but at the same time much of what happens doesn’t seem to mesh well with what we’ve been told in the previous book. I think that Kevin J. Anderson wrote it this way to surprise us but it really doesn’t work that way.

I’m speaking of course about the titular dark apprentice who turns to the dark side almost inexplicably over the course of maybe five pages. The abrupt turnaround in the character’s nature seems implausible knowing what we do about jedi who wind up going down the dark path. It took years of manipulation by Palpatine to turn innocent Anakin Skywalker into Darth Vader. Luke’s brief brush with the dark side came after long bouts with self doubt. Here, a formerly eager protagonist who echoed Luke’s innocent demeanor gets angry and then all of a sudden he’s a sith. It does not sit right.

It feels like Anderson was building one character to turn to the dark side and the buildup was organic and natural. You could understand why he might be tempted. It made sense. Then that character is tossed aside for the one who just doesn’t mesh and that part of the story seems like a bust. Everything that comes after leaves you shaking your head wondering what the purpose of the sudden shift in direction serves.

Other elements of the book are quite intriguing. Admiral Daala’s military assaults and Admiral Ackbar’s tribulations make for some of the more interesting parts of the novel. But considering that this is the Jedi Academy trilogy, the fact that the a-plot falls apart drops the overal score down a few notches. 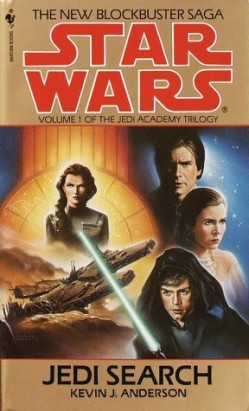 Wow, I was actually caught off guard when I cracked the cover of this book because I skipped ahead in the timeline long enough that somewhere along the way Emperor Palpatine was resurrected, Luke studied the dark side alongside him and then the old bastard died again. It turns out this happened in the Dark Empire comic, which I only have a vague recollection of. It doesn’t affect much as the streamlined summary I just gave sums up everything and it isn’t really mentioned much anyhow.

The plot revolves around Luke trying to form a Jedi academy, collecting pupils from across the galaxy. Meanwhile Han and Chewie get captured while on a diplomatic mission to Kessel. Normally you wouldn’t want that guy doing diplomatic missions in the first place but he gets the gig because of his former associations smuggling spice out of the prison mines. Of course, the people in charge there have old beefs with him and as such everything goes to slag. It’s interesting that over the course of the books I’ve come to dislike Han a bit more with each book. It started in The Courtship of Princess Leia where any semblance of logic in his brain went out the window and it continues here in Jedi Search with none of his resourcefulness coming into play at all when it comes to his capture. And while he manages to escape (he is still Han), much of it comes down to blind luck and it diminishes him as a character in my eyes.

The book also sees the return of Admiral Daala who we first met in Death Star but if I recall correctly this is actually her first appearance. Much of her backstory was just filled in over the course of that later novel. There’s not a lot of disconnect between the two other than there is no mention of her supposedly very serious injury that forced her departure from the Death Star as represented in that novel.

Jedi Search is an average book that really just works as setup for further adventures by bringing in Daala and introducing the weapons developments in the Maw cluster at Kessel. Luke manages to scrounge up two students for his Jedi academy but nothing comes of it. That will get handled as the trilogy progresses. Hopefully there is more substance to the next two books as this one felt a bit light.