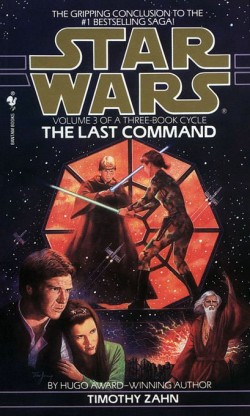 I was really amped up to finish this trilogy. The second installment was just amazing and so I was more than ready to see how everything wrapped up. While I think the book was an admirable effort, it just wasn’t as good as the second book. Still better than the first, I think. But I may be alone in that line of thought. I can’t be sure. I’m avoiding reviews on any of these books while I write my own so as not to be influenced by outside thought. All of this bullshit is entirely of my own design.

This installment seemed to hit the peak as far as the “Thrawn is an unstoppable infallible force” trope where things seem to go in his favor every single time. Of course it all falls apart in the third act, but for the most part the book seems to throw as much of Thrawn being the epitome of the unbeatable villain as they could possible manage. It can get a little overbearing sometimes. I’m not going to lie, the repetitive nature of Thrawn gets grating after three books. He’s still a more interesting villain than say, Zsinj, but I still think that Isard was a better antagonist simply because she didn’t fall into the same pattern that Thrawn tends to in each and every book.

The climax of the book dealing with C’Baoth is a little fan-ficcy as well. Before the prequels delved into what exactly happened with the Clone Wars, every fan fiction had a clone jedi running around and the fact that this book decided to go in that direction is a little disappointing. The eventual ending does a good job of wrapping up the Mara Jade sub-plot, and the star battle that accompanies the denouement is actually quite well written. But compared to the climax of the last book it didn’t impress me all that much.

Next we return to the X-Wing series with Isard’s Revenge.

I was afraid that my interest in this project was beginning to wane as I started reading the first few chapters of this book. It wasn’t hooking me in at all. The prose felt stilted and lifeless in areas and the story seemed tedious. The rest of the book redeems itself once the main characters find themselves off of Coruscant but the time it takes to get there and the characterization of the leads is a sluggish slog that takes a great amount of willpower to overcome. The book reads like a first draft, with the language and narration feeling like it was never refined to the point of general readability. And the conceit that Han Solo is Corellian royalty just smacks of bad fan-fiction, though the concept is redeemed in the closing moments of the book when the outcome is played for laughs.

The novel gets better as the narrative progresses, with the action on Dathomir being engaging and outside the usual realm of what one associates with the Star Wars canon. The melding of iron age fantasy style elements with Lucas’ sci-fi brings out something that hasn’t been seen in any of the other books I’ve read thus far in the pantheon, the closest being perhaps Rogue Planet with the agricultural ship-building conceit being similar to the image presented of the Hapan castle-ship. But the general idea of the force being identified as magic and a whole sub-culture of force sensitives building their own mythology around it separate from the jedi is an interesting one, although the abrupt and out of place nature of the concept takes a while to get used to. Honestly, the whole exploration of the cultures felt a lot more like an episode of Star Trek than anything in Lucas’ wheelbox. Author Dave Wolverton isn’t afraid to mix genres and create something interesting, he just didn’t do it in a way that left the book feeling as polished as the X-Wing series. If anything it feels more like Shadows of the Empire, and if I had to guess I’d say that the tone of the novel is something linked to the time period it was written in. The X-Wing books and something like Death Star feel very different from Shadows or Courtship, and I believe it is because this book is one of the earliest in the expanded universe and they were only beginning to get comfortable with establishing their own universe.

Definitely my least favorite of the books I’ve read thus far, but its not a total disaster either.