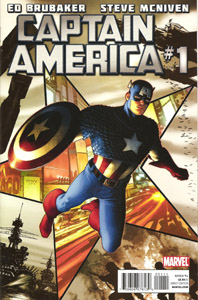 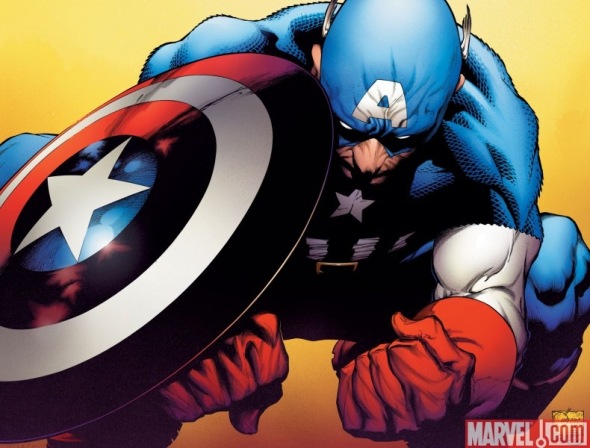 So, uh…is Steve Rogers poppin’ a squat to make some poos there or am I totally misreading that image?

Captain America – Reborn, the mini-series that brought Steve Rogers back to life in the core Marvel universe which saw significant delays and even had to tack on an additional issue to tell the full story, finally finished up a few weeks back and I’ll admit that while I picked up the issues when they hit stands, due to the nature of the delays and whatnot I never actually read the story.

Now that the arc is complete and I don’t have to worry about Bryan Hitch ever getting the art done, I sat down to read the story in its entirety and give it an honest shake. Does it measure up to the hype surrounding it? Does it seem consistent with the rest of Brubaker’s work thus far with the character? Does it meet my requirement of at least one M.O.D.O.K. appearance? All these questions and more shall be answered.

The central premise of the story is that the Red Skull and Dr. Zola, using epic amounts of SCIENCE!!!!!, used a hypnotized Sharon Carter to shoot Captain America with a magic gun that would dislodge him from the present and basically freeze him elsewhere in the timeline. Like being stuck in a block of ice, but with more sciency mumbo-jumbo.

This book is so pulpy you would think they printed it on orange juice. Norman Osborne has a portion of the technology needed for the Skull to retrieve Steve from the timeline, and aims to help him so he can have a legitimate Captain America on his team but with the Skull’s consciousness in his body. You know, because he’s evil.

All in all, the book felt like a mixture of classic Avengers storytelling (what with just about every current Avenger; Mighty, Young, New or Dark, appearing in the issue) and Brubaker’s modern neo-thriller sensibilities that he’s used to parlay Captain America into one of the most amazing books on the stands.

But really, it all comes down to one thing: