I’m of two minds when it comes to this book. I think that some of the hurdles presented in the previous installments have been corrected and as such the story is able to move forward without those nagging hindrances. That having been said it felt a bit boring in contrast with it’s predecessors and even though it’s the shortest of the series thus far it never really seemed to pop the way the others did.

It’s hard to write a review for a book that is neither great nor terrible. It’s harder still for me to specifically pinpoint what makes the book feel like it fell short. It’s better written overall than Allston’s first installment and the story is compelling, with the subterfuge of a previously staunch Imperial agent having to navigate her new life as a pilot for the Republic. Those story beats alone make the book worth reading. Perhaps it just felt a little bit too much like filler. I can’t say for sure.

I wasn’t truly disappointed in the book, it simply didn’t connect with me the way that I was expecting. I think it fits well in the overall scheme but does little else. And maybe that’s okay. 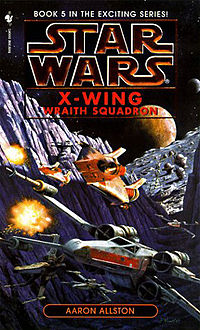 I was wondering where the series was headed after the last book. “The Bacta War” was a satisfying end to the Rogue Squadron’s saga and so when the next novel started, under the direction of new writer Aaron Allston, what stories could be mined from Wedge Antilles and his X-wing fighters? It turns out that Allston knew that continuing with the members of Rogue Squadron as the principle protagonists wasn’t going to cut it if he was going to make his own mark on the series and instead opted to create a new group of rag-tags to exploit. This new group, code-named Wraith Squadron, is essentially the Dirty Dozen or the Inglourious Basterds of the Rebel Alliance. Cultivated from the washouts and lost causes of other units, Wedge Antilles puts together a team of commandos to fly X-Wings, turning Rogue Squadron’s initiative of pilots who do commando work on its ear.

The action picks up not long after the last book ended, with the primary focus of the New Republic fleet being the destruction of Warlord Zsinj, a portly renegade admiral who has slowly been consolidating his power away from the control of the now defeated Ysanne Isard. The novel moves at a brisk pace beginning with the formation of the squadron and along its missions where they end up in control of an Imperial ship and pose as its crew to get close to their enemy. The novel is thoroughly entertaining in its progression because of the sort of pilots who make up the group. The most interesting characters are the ones that are flawed and here everyone is vying for the title of most dysfunctional with only Wedge and his second in command Wes Janson truly having their game together, which makes for some interesting scenarios when the group has to work together to accomplish their goals.

I have to admit that while it was a really good novel, it took a while to get acclimated to the new cast of characters, because the flaws that are designed to make them interesting at times makes them come off as unlikeable. Kell Tainor, for example, is stepping up to take the place of Corran Horn who was the lead protagonist in the previous four novels. Much like Corran he has some issues with his father’s death, but Corran didn’t come off as emotionally crippled as Kell does. Corran had a tangible ability for revenge for what happened to his father whereas Tainor refuses to understand the circumstances that led to his father’s death and it takes a while to take him seriously as a character and not an archetype.

Overall, it’s an enjoyable read that does well to get it’s major flaws resolved by the end of the book so that they don’t take up any time in the following installments. Or at least I hope that’s the case.