I’m of two minds when it comes to this book. I think that some of the hurdles presented in the previous installments have been corrected and as such the story is able to move forward without those nagging hindrances. That having been said it felt a bit boring in contrast with it’s predecessors and even though it’s the shortest of the series thus far it never really seemed to pop the way the others did.

It’s hard to write a review for a book that is neither great nor terrible. It’s harder still for me to specifically pinpoint what makes the book feel like it fell short. It’s better written overall than Allston’s first installment and the story is compelling, with the subterfuge of a previously staunch Imperial agent having to navigate her new life as a pilot for the Republic. Those story beats alone make the book worth reading. Perhaps it just felt a little bit too much like filler. I can’t say for sure.

I wasn’t truly disappointed in the book, it simply didn’t connect with me the way that I was expecting. I think it fits well in the overall scheme but does little else. And maybe that’s okay.

Michael Stackpole hands the series off to a new writer following this entry wherein his story for Rogue Squadron comes to a satisfying conclusion. Leaving off on somewhat of a cliffhanger in The Krytos Trap, Imperial baddie Ysanne Isard has taken control of Thyferra with the aid of a traitor in Rogue Squadron. Blocked from staging an attack by the government of the New Republic who are firmly against interfering in the internal politics of unaffiliated worlds out of a fear that doing so would alienate future converts to the cause, the pilots of Rogue Squadron resign their commissions and become independent freedom fighters hoping to topple Isard’s government on their own.

Much like Wedge’s Gamble had thematic ties to The Empire Strikes Back, the fourth book in Stackpole’s X-Wing saga has more than a few thematic similarities to Return of the Jedi. The simplest comparison comes from the fact that both tie up their respective sagas. Fortunately, The Bacta War is better constructed than Return of the Jedi was. There isn’t a huge tone shift from the previous book to this one, as there seemed to be between episodes V and VI, though genres are once again hopped and we return thematically to the same sort of narrative that was present in the first and second books, with the focus being on military combat and covert insurgency this time around. Stackpole realizes that he has to tie up everything and he does so quite well. The book could very well have been anti-climactic but the finale is quite well developed and leaves the stage set for later installments.

The part I found most appealing about the book was the character growth shown by more than a few of the main cast. The events of the series have really helped to shape and define them as organic characters and as such we get some nice moments where the reader sits back nodding, excited that something that has been clear for several books is finally acknowleged and the time put into reading the books has paid off.

All in all, a fine finale to the first chunk of the series. 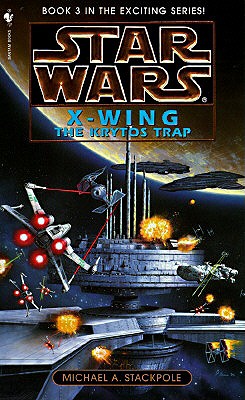 The thing that strikes me the most about the expanded universe novels I’ve been reading since starting this little project is how books in the grand scheme of things, and even on a smaller scale within the context of their own saga, can jump from genre to genre with such amazing frequency. The first novel in the “X-Wing” series was a straight up military adventure story, a sort of Top Gun for Star Wars in many ways. I had anticipated the rest of the novels following a similar structure. The second novel, Wedge’s Gamble, took a different turn altogether, playing itself out as a spy/espionage thriller that read in many ways like a James Bond novel set to a sci-fi setting. Once again the series hops genres and this time plays itself as a John Grisham courtroom drama mixed with a little bit of The Great Escape thrown in for good measure. Incidentally, I found it to be the most engaging novel in the series thus far, with the twists and turns of the courtroom drama moving at such a brisk pace and in a manner that invited a great deal of speculation on the part of the reader. At the end of the previous novel, we are left wondering about the guilt of Tycho Celchu’s involvement with the supposed death of a Rogue Squadron member, and the revelation that he was captured and not killed by Ysanne Isard in the epilogue of book two does nothing to sway opinion either way, so the court case is handled with the reader not having concrete evidence either way, making the drama around the proceedings all the more potent.

With the secondary plot of the supposedly dead pilot trapped in the infamous Lusankya prison, the tone is evocative of films like The Great Escape, with our rebel pilot having a twinge of Steve McQueen in his character from the get-go, the comparison is more than adequate. His escape attempt, in which we learn that he is in fact descended from Jedi stock could have been considered a bit cliché if not for the fact that hints had been dropped since the first book in the series that this might be the case. There is of course a tendency to want to tie things to the Jedi in the Star Wars universe, and the revelation could have come out like badly written fan fiction if the writer had decided out of the blue to make one of his main characters a Jedi on whim, instead we get a major plot point that informs the climax of the novel and sets up the next installment. The choice of either becoming a Jedi and abandoning Rogue Squadron or remaining with the team and making good on promises made earlier in the narrative becomes the crux of the denouement here and leaves the reader energized to read the next installment, almost knowing that things that have been building over the course of three books and 1,000 pages worth of story will seemingly get a final payoff.

The next book in the series is the last for the author and the saga is taken over by perennial Star Wars writer Aaron Allston for books five through seven, so there is an expectation of closure with The Bacta War. Whether that holds true is yet to be seen, as it could be much as it was with the Republic Commando series and only leads further down the rabbit hole. 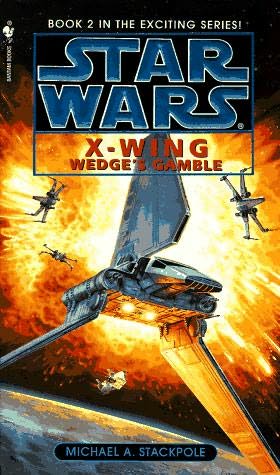 Here marks the tenth book in my quest to read through as much of the expanded universe as I possibly can before the end of the year. The second installment of the X-Wing series in many ways mirrors the second film in the original trilogy in that it’s much more engaging than its predecessor and ends on a cliffhanger with one of the principle players in the hands of the enemy. I don’t think that tactic was in any way accidental, I think the author was hoping people would see the parallel and understand the fact, much as I have, that the stories in the Star Wars universe are inherently cyclical. There is an element of history repeating itself over and over again in this universe and while it never becomes repetitive  it does become easier to understand the actions of certain characters.

The book deals with the undercover insertion of Rogue Squadron into Imperial Center, formerly Coruscant, in the hopes of weakening it enough for the rebellion to overthrow the government and take control of the planet. They do this by liberating criminals from a prison planet and re-establishing a smaller scale faction of Black Sun, previously crippled with the death of Xizor in Shadows of the Empire, to destabilize the government. What results is a tense espionage style thriller set in the Star Wars universe that seems to resonate particularly well in the times of strife we see in the middle-east today. There is an aura of truth to the political warfare waged in this book, on both sides. The Empire is an enormous propaganda machine with museums dedicated to the deceased Emperor’s glory and his views on the history of the Jedi and the Old Republic. The Rebellion knows it has to sacrifice it’s core values and employ less than desirable elements to help with their cause. It’s all very much like the way our real world works and as I’ve said before, that’s the cornerstone of great sci-fi.

I’m really looking forward to jumping into the next book but it will probably take me a while to finish as I have two other books that need to be read by next week for classes at the university, but I may try to sneak in a chapter every day just to break up the monotony.