I made the horrible mistake of visiting the IMDB boards for this movie shortly after seeing it. I sometimes forget what a cesspool of ignorance and misery that little patch of internet earth is. Nearly every thread was a black hole of negative energy and petty whining. The people who frequent those boards are, by nature, soulless vultures from the bowels of hell whose one purpose in life is to spread malice and discontent like a disease throughout the labryinth of that site’s message board system. Thread after thread of “They Changed This!” or “Watered Down Crap!” or “This Just Sucked!” or any other mindless dribble they could spurt out like warm blood cut from a femoral artery. I mean, good lord…when you hate everything with such fervor what does it feel like to enjoy something? Would your brain explode like that scene in Scanners? I mean, I am sometimes driven to physical pain by some of the shit I read for this site (*cough*Brightest Day*cough*) but at least 80% of what I read leaves me feeling warm and happy and content. Why are some people so prone to fits of teeth-gnashing hatred over stupid, stupid things?

I should probably state that The Losers is a damn fine film. It hearkens back to the action films of the 80’s that didn’t take themselves too seriously. Where everything wasn’t some pseudo-Jason Bourne world where everything had to be grim and melodramatic and one-liners were punishible by death. I enjoyed it about as much as I have any other movie this year, and I think it’s because everything about the movie is done with the intent of thoroughly entertaining the audience. You do not make your villain chew THAT much scenery if you’re not hoping to go so over the top that you didn’t even realize you’d scaled the bar. This is not an art film people. It’s an action flick for the sake of being an action flick. If you’re not on board with that you probably missed all the signs telling you what to expect when you watched the damned trailer. And don’t act like you didn’t see a trailer.

The major complaints seem to be over the changes made from the book to the film, which I’m tired of hearing. The book and the film are two different entities. Where was the outrage over the changes to Two-Face’s origin back when The Dark Knight came out? There was some, of course. But it wasn’t overwhelming. The boards for The Losers are populated with multiple threads for “ROQUE ISN’T SUPPOSED TO BE BLACK ****WHARGARBLE***!!!!” or “ZOE SALDANA WAS SUPPOSED TO BE AFGHANISTANIANIANIAN!!!!” or other such negligible bullshit. The changes were made to allow the movie to be the movie and the book to be the book. It doesn’t hurt the book that the changes were made to the film. Judge the film on the merits of what is presented in the context of the film, and there is very little to complain about except for some minor stylistic choices in the action scenes and perhaps the fact that Chris Evans is too damned awesome.

I went back and re-read the first volume of the book following the movie and the spirit of the book remains almost wholly intact. The characters on the screen are very much like their counterparts on the page, except for Max who dialled it up to the point that he makes Bond villains uncomfortable. But on a base level, the two are very much alike, with scenes lifted directly from the book to placate those who need everything to be exactly the same all the time.

THE LOSERS get a trailer… 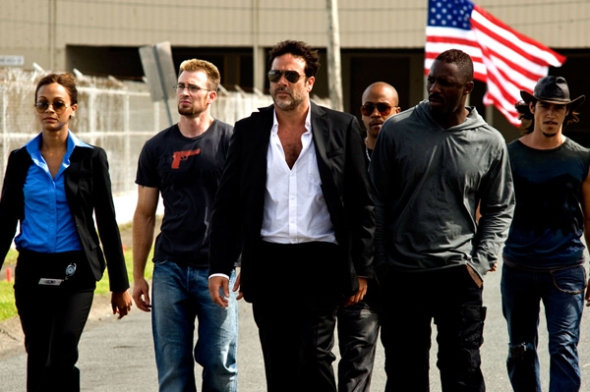 Here’s the first look at the film adaptation of Vertigo’s THE LOSERS, which looks so damned good that I’m almost afraid that this is some sort of hallucination brought on by a whiskey overdose…
CLICK TO VIEW